I study the history and archaeology of Iron Age and Archaic Greece with an emphasis on public authority and society. In my dissertation, "Sacred Wealth and Institutional Development in the Archaic Argolid, Corinthia, and Saronic Gulf," I explore the problem of conceiving of the early polis as an economic actor comprised of many individual economic actors, given that the early polis’ institutions seem relatively fragile. How did such a weak institution, so strongly based around consensus and opting-in, develop and maintain claims to public property or public management of resources? In this sense I hope to contribute to our understanding of institutions, especially weak institutions, more broadly. I focus my research on the Argolid, Corinthia, and Saronic Gulf because the archaic historical, epigraphic, and archaeological data is relatively abundant and the poleis involved raise particularly interesting questions of public management.

My interests in epigraphy and the archaic polis stem from my study of Crete. I have long been fascinated by Crete as an in-between place in ancient and modern Greece. In my masters thesis, “Less Conspicuous Consumption: Votives and Competition at Iron Age Gortyn,” I considered the possible role of extra-island imports as a strategy for establishing and performing relative social status at an important local sanctuary. Since receiving my MA, I have had the opportunity to consider Crete’s epigraphic record in more detail, and remain interested in problems of state power and epigraphic habit.

Other areas of interest include relationships between the Near East and the Aegean, Late Republican Roman politics, and classical education in the early modern period, particularly colonial America.

I came to AHMA in 2014 after graduating from Dartmouth in 2013 with a B.A. in Classical Languages and Literatures. My excavation experience includes fieldwork at Gournia, the Athenian Agora, and Aidonia. I have spent the last two academic years in Athens at the American School of Classical Studies, Athens where I enjoy working on my Greek and following the San Francisco Giants from afar. 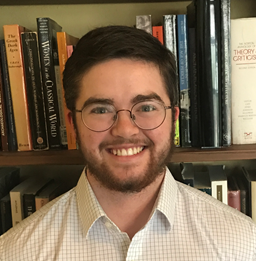